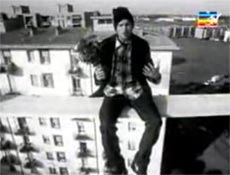 Lorenzo Cherubini, aka Jovanotti, is an italian singer and songwriter (they are named "cantautori" in Italy). He is interesting due to the fact that his music is versatile and different to the romantic music most of us are used from Italy. Jovanotti likes to experiment- his music is influenced by Rap and Hip Hop and his lyrics are quite daring -but touching at the same time.

Jovanotti's music has played a big a part of my teenager years (in the 90's) and has sentimental value to me. I remember the time where his great song "Serenata Rap" came out and it was being played on the radio stations all day long. I really loved this song and the way he expresses himself in it; I enjoyed watching its video in particular because it is funny (yet somewhat scary :)) to see.

Later on when I learned some italian and could understand the lyrics of his songs, I fancied Jovanotti even more, because they are lets say..refreshing. My favorite album of him is "Lorenzo Raccolta" and the songs that stand out according to me (besides "Serenata Rap" of course) are "Penso Positivo" ("I think positive") and L'ombelico Del Mondo" ("The Navel of the World") because it is very positive and uplifting. I recommend this album, especially if you like Rap music.

Posted by Unknown at 5:16 AM No comments:

Eros Ramazzotti-Per Me Per Sempre

Today I'll to try to make use of my first Italian language skills and translate one of my favorite songs of Eros Ramazzotti, "Per Me Per Sempre". Please send me a comment should you see any mistakes.

Per Me Per Sempre(For Me, For Ever)


I believe this song is like a fairytale and so is its video. Here it is embedded for you so you can have a complete view of the song.

I may overdo it with videos lately, but this video(or is it Ramazzotti himself?) is so-very-nice , that I couldn't resist!
Enjoy "Un Attimo Di Pace"(2003) by Eros Ramazzotti, talking about a moment of peace on earth.
Posted by Unknown at 5:46 AM No comments:

FIFA World Cup (Mundial) 2006-La Squadra Azzurra
The Italian World Champions of Mundial 2006("gli Azzurri"), singing their football hymn, "Cuore Azzurro"- a song originally sung by Pooh. All the earnings went to the victims of violence in Sierra Leone.
A very nice song it is, and the lyrics are so uplifting! Well yes, they may not be the best singers ever- but who cares? They are the world champions!!! (...and so gorgeous as well, aren't they?)
So, FORZA AZZURI!!
PS. I know I am really behind time for posting this, but I have found the video just today:(
Posted by Unknown at 4:32 AM No comments: 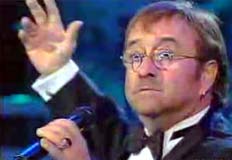 Lucio Dalla is a singer (and great songwriter) with a lifetime career, an artist who is also very popular in Greece-and rightly so.

You probably know Lucio Dalla because of his tribute to Ayrton Sena (the F1 driver who was killed at Imola in 1995)-or probably you are familiar with his worldwide hit "Caruso", dedicated to the tenor of the 20th century Enrico Caruso who passed away too early.

When you listen to "Caruso", you almost feel like crying (out of joy) Click here for the lyrics of "Caruso" with a translation in english. There are also some further versions of this song, like the one of Lara Fabian- well, personally, I don't want to listen to any other than the original.

But one shouldn' t stick to "Caruso", there is much more to Lucio Dalla... listen to songs of him like "Tutta La Vita", "Stella di Mare" or "Felicita"- they are wonderful, I am sure you will enjoy! Especially his song "Felicita", I must have listened to for more than 100 times :-)

I think that if Lucio Dalla didn' t become a singer, he surely would become a comedian or something of that kind. His way of acting and expressing and his videoclips always have a funny note..what I find most enjoyable is, that he also makes a little fun of himself, especially of his small height. He must have a great personality.

Posted by Unknown at 3:28 AM No comments:

Andrea Bocelli will be performing today, September 9, in the New York Philharmonic Orchestra for the last time in this tour.

How lucky must one be to live in New York on moments like this! If you do, I envy you- nothing more to say here :)
Posted by Unknown at 8:33 AM No comments: 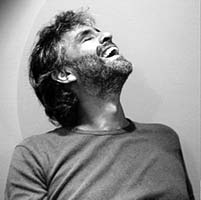 Andrea Bocelli is a tenor from Tuscany and one of the greatest representatives in classical music! Well, actually not entirely classical, since Bocelli can sing everything from arias to pop ballads...

Andrea Bocelli is a tenor who "sings with his soul" and is also successful as a writer and music producer. He is known to be a very calm and sophisticated person and always has a heart for charitable events.

Andrea Bocelli was discovered in 1992 by Zucchero Fornaciari, when Zucchero was seeking for a tenor to record a demo of his song "Miserere". First, Zucchero was having Luciano Pavarotti in his mind, but then he came upon Andrea Bocelli and was enthused over him. When later on Pavarotti listened to the demo of Bocelli, he commended:"Who is this man? You don’t need me, I couldn’t do better!"

From then on, Bocelli has accomplished incredible things in music, despite his blindness.

His duet with the soprano Sarah Brightman "Con Te Partirò"("Time To Say Goodbye") has sold more than one million copies worldwide, his duet with Eros Ramazzotti, "Musica E" (Music Is)- a blend of pop and classical music- become a smash hit... Bocelli has even won the Golden Globe for Best Original Song for the song "The Prayer"-a duet with Celine Dion!

My favorite song is "Sogno", I think it's just wonderful!

One of the greatest moment in Andrea Bocelli's career and life was when he was selected by Pope John Paul II to record the hymn for the Great Jubilee (Gloria a Te, Cristo Gesù), included in his album of 1999, "Sacred Arias".
Posted by Unknown at 1:14 AM 1 comment: